1st – At CarbuyerUSA.com you get a FAST instant cash offer, we pay cash for cars, and our purpose is for you to sell your car, truck, van, or SUV to us. All opinions are my own (writer) and do not in any way reflect Car Buyer USA’s views. I just talked about this last week. Wow, an Uber’s autonomous car test drive in Tempe, Arizona was the fear I had and one of the biggest fails to date. It’s so sad and should have not happened and to Uber’s credit they have halted their self-driving car testing after this deadly car crash. A female pedestrian, crossing the street was struck by one of their cars driving in autonomous mode, died on the way to the hospital. Everyone at Car Buyer USA and I send our deepest condolences to her family and friends.


Tempe, Arizona police are investigating and Uber is fully cooperating, the mayor is looking into this accident and I’m sure combing through their city and state regulations, as they should be. According to a Bloomberg interview, Arizona seems to be the go to state for companies to have the most latitude to really experiment. Here’s my biggest beef with this new fairly technology; it’s the 3rd fatal reported case resulting from an autonomous car accident. The 1st two incidents involved Tesla, which to the best of my knowledge are still being adamantly contested. According to Bloomberg, this Uber crash is different.

“In Tesla’s Florida crash, the car was purchased by and used by the victim. In the Arizona crash, the vehicle was a test vehicle under the control in every sense by Uber, and the victim was an ordinary person.” ~Bryant Walker Smith, Professor, USC School of Law

Will Arizona’s fatal crash shake consumer confidence and set back the progress that’s been made? I predict we’ll be finding out really soon.

"It will set consumer confidence in the technology back years if not decades," said Jason Levine, executive director of the Center for Auto Safety, a Washington-based advocacy group. "We need to slow down."

What do I think about buying an autonomous car? I’m not there yet. I want compulsive testing off roads and in an environment set up with every conceivable scenario they can collect from incidents, crashes, near misses, etc. in every type of climate conditions, day or night. Note: CarBuyerUSA.com did NOT provide me with any information or direction, nor did they ask me to write a piece on my opinion.

On a lighter note, when you find you need extra cash, fast cash, just want to get rid of that vehicle taking up space in your garage or backyard, we’ll give you a FAST, EASY, and SAFE instant cash offer and you can sell your car to us. After all, we pay cash for cars in any condition in any Continental U.S. state, including those not running or that’ve been in a car crash. But when it comes to a self-driving car? Well, we don’t plan to have any wows. If we send a tow truck to pick up your car, it’ll have a human holding the wheel. It won’t be an Uber autonomous car or truck.

Ok, there are dummies, then there are dummies; and a Connecticut man falls into both dummy categories. Dummy one, well, they’re just a dummy. Dummy two, well, that would be a dumb dummy. There’s definitely a ring of “So a man with car theft charges drives to his court appearance…” in this story. You know, kind of like “A dog walks into a bar and asks the bartender if he’s got any jobs… yada, yada… it’s a bad joke, but you get it. This guy made me laugh, he got busted for a stolen car and thought, “I need a ride to see the judge” and figured any ole car would do. I think this is a good time for a disclosure: Even though we say we give you the highest instant cash offer in about 20-seconds and we buy cars in any condition, running or not, you cannot sell your car to us if it’s stolen.

According to the Associate Press, Mr. Jonathan Rivera, charged back in February with tampering with an automobile and first-degree larceny, had his day in a Hartford, Connecticut court on March 7th. While inside visiting with the judge, parking lot security was busy rolling through the parking lot scanning plates. Unfortunately for Mr. Dumb Dummy, the car that’d safely gotten him to court on time had been reported stolen. 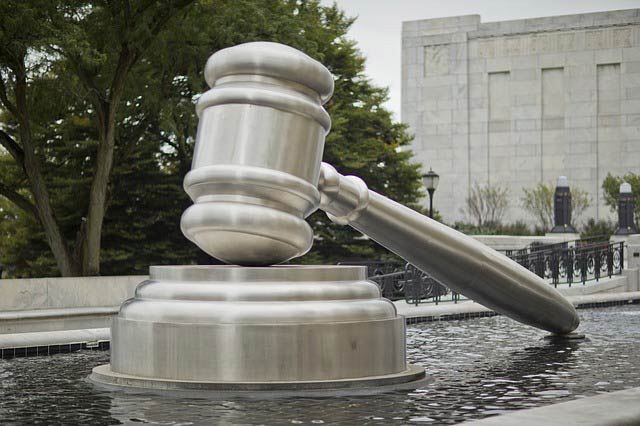 LOL, what an arrogant dummy. I guess he thought, “who’s gonna think he’d be dumb enough to do it?” Or maybe it was a way to “stick it to the man!” Ha! The joke was on him and it was a smart move on the police’s part to hang out waiting to see if the culprit would come back to the car. Which, the dummy did and was charged AGAIN only this time with taking an automobile without the owner’s consent and second-degree larceny.

Now, remember folks, don’t be the man that drives a stolen car to a court appearance for car theft charges. For that matter, don’t be the guy who steals cars. We definitely buy cars, and we even come to you to do if you need us too, but you can’t sell your car to CarBuyerUSA if it’s not yours. BUT, if you need extra cash and the title to the car, truck, van, or SUV is in your name, we’ll give you an instant cash offer in as little as 20-seconds! Our 2-step process uses our patent pending formula to give you the highest value offer you’ll get anywhere else online! We even beat KBB®‘s quote! Don’t wait! Get started and get cash in the bank FAST, SAFE, and EASY!

Antonio Padilla (from here out may be referred to as he, him, his, and idiot) probably didn’t think his day would wind up with man’s best friend taking charge of this idiot’s stupidity and setting him straight, but it did. But then again, the idiot probably, well definitely, shouldn’t have committed an ADW against a Garden Grove Police Officer on February 18th either; the Garden Grove Police Detectives had been tracking him all week. It makes this carjacking his dumbest decision for the day and lead to an intense chase… IDIOT 0 points. Police Dog Puskas Scores! #K9Bite by SAPD K9 Puskas 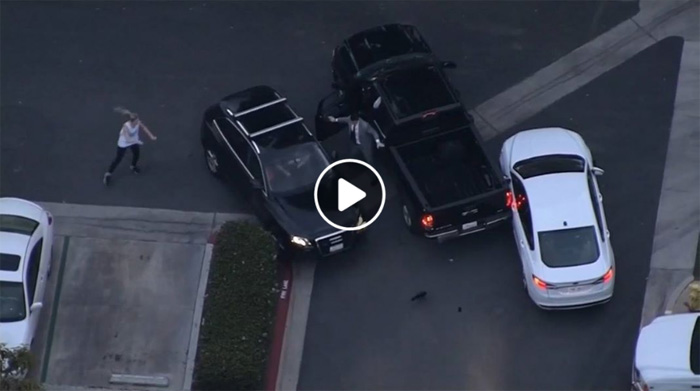 This chase started with…

Some rules I personally would like to suggest to Idiot. 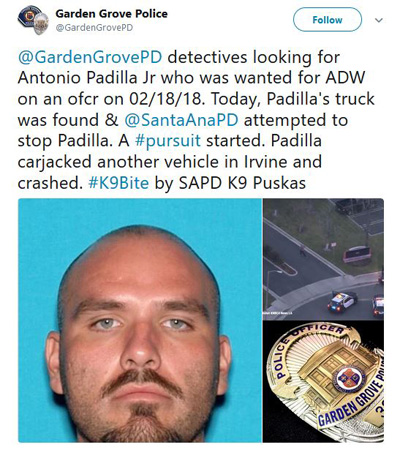 Rule #4
Always have a spare pair of underwear handy. You never know when you’ll “soil” your pants. 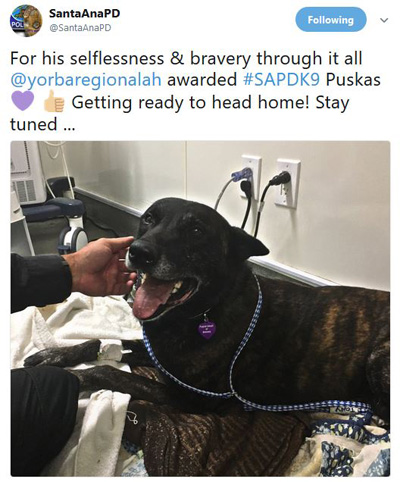 Rule #6
Don’t EVER make “Bad boys, bad boys, whatcha gonna do when they come for you?” go off in my head AGAIN! Do you know how hard it is to make it stop?

Rule#7
We buy cars and trucks, even damaged trucks, damage cars too for that matter.

Some sad news, aside from his canines (there’s a pun there), Puskas lost his upper and lower teeth. But the good news is, he went into surgery and it went well for him; and for his hardship he was awarded a Purple Heart.

I guess to wrap this up I should throw in another rule for Idiot. Rule #9, carjacking doesn’t pay in the long run. Which reminds me, how did it feel to be the dog treat after in intense chase? LOL, Police Dog Puskas Scores! But hey Idiot! There’s good news for you! We buy cars, trucks, vans, and SUVs running or not, oh and in any condition! So you’re in luck! Call us when you get released and sell your car to us. Yep, I said car. Pretty sure that truck of yours is going up for auction, but we don’t judge. We’ll pay you top dollar the FAST, SAFE, and EASY way.