No Hassles! We Come To You.
Buckle up! Cops Pull Over Car with Metal Stool for A Seat

Buckle up! Cops Pull Over Car with Metal Stool for A Seat 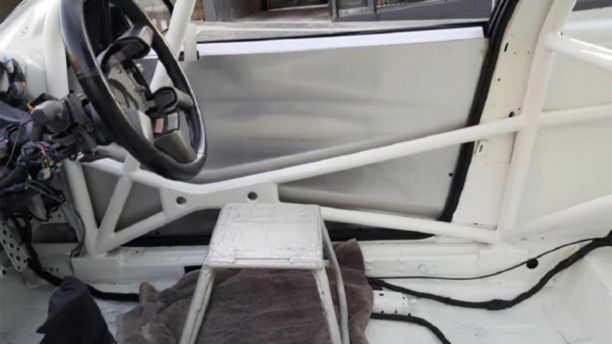 Boy, have times changed. I remember in high school the boys restoring their 1967 and 1963 Camaros doing this very thing. Cops didn’t pull over their cars to give them tickets for sitting on a metal stool when driving down the road. They pulled them over to check out their cars! And I’m pretty sure they never said buckle up now that I think about it. Some cops even let all us kids get away with racing on a desolate road! Yes, I know. Some of you are shuttering at the thought. I’m positive you’d shutter harder knowing some cops actually brought us 6-packs for after hours at the local pizza joint. Ah, the good old days! Disclosure, I’d be one mad mom if this courtesy happened for my kids!

Recently making the news is an Australian driving down the Central Coast Highway on Friday minding his own business. The police officers noticed the car didn’t seem to have a windshield so they did their civic duty and pulled him over to check. To their surprise, that wasn’t all the car was missing. If the guy had been here in the States and had a spare car to sell… well, we buy cars. Just saying.

Per Fox News, as the two New South Wales Traffic and Highway Patrol officers got closer to the Commodore, they realized the interior was completely stripped down and it was missing its seats. Well, all except for the metal stool the driver was sitting on which by the way had a towel on the floor under it. In case you don’t know, the Commodore is the model we here in the States know as the Chevrolet SS. Own one? Is it restored? Call us and talk to one of our live agents to see if you can sell your car quick to us! If so, we’ll give you an instant cash offer you’ll love!

The good news for the driver was his car had a roll-cage installed, but the bad news is this suggested it was clearly made for racing and wasn’t street legal. A comment on the NSWTHP Facebook page joked, “Friday is International Take Your Race Car To Work Day.” Unfortunately, it was nothing to joke about for the car owner. He got slapped with a number of violations adding up to $1,200 in fines. Guess he’ll need to start saving for that racing seat all over again.

Here’s my message to all who are restoring their classics and just “reinventing” a car taking it to what they think is the next level. Before you position a metal stool in front of the steering wheel, no matter how tempting the urge to hit the streets for a test drive, if you have a vehicle sitting around to spare, sell your car quick to us! We buy cars in any condition anywhere in the Continental U.S., and if it’s not running it’s not a problem! We’ll buy it and give you the highest instant cash offer you can find anywhere else! Then? Then you can buy that seat you’ve been eyeing and get your car street legal! Oh, and don’t forget to buckle up. It’s also the law.