No Hassles! We Come To You.
Sell Your Car - 2011 Ford Mustang in Rayville, LA - CarBuyerUSA 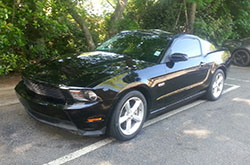 Customer called and said they wanted to sell their 17k mile 2011 Mustang. The car was not being used and they wanted to sell before it lost too much value. CarBuyerUSA gave them more than they expected even though they were in a remote area. We came out to them and had the car purchased and the customer had the money in the bank in under 48hrs.