No Hassles! We Come To You.
Can I Sell a Car with a Carmax Salvaged Title? | CarBuyerUSA

Selling a Salvage Title Vehicle is Not an Easy Task

DamageMAX, the leading damaged vehicle buyer in the United States, has completed a comprehensive analysis on the impact of salvage title brands on repaired and damaged vehicles. In this study, over 5 million wholesale vehicle transactions through June 2013 were used to identify trends in value diminution associated with salvage (rebuilt) title brands.

There are different terms associated with salvage branding. These are controlled at the state level and are unique similar to the administration of titles which come in many shapes, sizes, colors and, of course, prices! For the purposes of this study, only Salvage/Rebuilt/Rebuildable branded vehicles were included and non-rebuildable/parts-only title vehicles have been excluded.

Not all states have salvage title thresholds, but those that do generally range from 60‒100% of the Fair Market Value (FMV) of the vehicle, which insurance carriers refer to as Actual Cash Value (ACV).

Salvage thresholds are in place to discourage the public from repairing vehicles if the extent of the collision damage is beyond what that state department of insurance deems as safe. When collision damage is severe, certain states including Florida and Michigan mandate that a Certificate of Destruction or scrap title be issued. This requires that the vehicle identification number (VIN) is decommissioned and the vehicle be sold for parts. Insurance carriers favor the term ACV in place of FMV to help avoid disputes with their claimants who seek the maximum reimbursement (retail) for their total loss. Certain guidebooks are notorious for inflating retail prices through editorial opinion to benefit subscribers. Insurance carriers rely on estimatics data providers to provide total loss valuations that utilize data from various sources to create a published “take price” or ACV. Insurance carriers expend a great deal of energy collecting value information and managing the claims process to assure a fair settlement offer and to reduce potential overpayment on any individual claim.

Note: In states without a total loss threshold, 70% of ACV is generally used as a benchmark.

Scope of Data
Vehicles from 1997 to 2013 were evaluated in clean and damaged condition. Salvage title discounts were established by model year. We found that the sample size used was large enough to establish firm trends without granularity of criteria typically used (make/model/body) for predictive pricing. Transactions were arranged by JD Powers segment to evaluate how specific vehicle types performed comparatively.

Takeaways
The average discount a salvage title vehicle will experience when compared to an analogous clean title is 66%, meaning that the vehicle will only fetch 34% of average wholesale in repaired form. In the matrix below, the discount will range from 60‒80% depending on the model year. For example, a 2013 model vehicle with a salvage title is only worth 40% of its wholesale value. Over 5 million transactions spanning 10 model years were used to establish the trend[1].

Damaged Vehicles with a Salvage Title
Conventional wisdom dictates that an unrepaired vehicle is worth less than a repaired vehicle of the same year, make, model and miles. This is not always true – a repaired vehicle with a salvage title is often worth less than an unrepaired vehicle with a clean title. Parts buyers (recyclers) typically look to buy salvage title vehicles because they do not want to compete with wholesalers and retail dealers who intend to repair and resell to an end user. This segment of buyers also includes exporters who have no interest in what the title brand is because the title is simply an instrument needed for the export process.

Assessments and Outside Factors
This analysis is directionally sound as the data used was significant enough to establish concrete trends. These trends can and should be used by sellers, buyers, and those desiring to appraise a salvage title vehicle. Will there be exceptions? Always, but those have to be managed carefully to avoid financial chaos. First, we have to consider what drives the decision to rebuild the vehicle? It may be an emotional attachment to a particular vehicle, an immediate need to replace the vehicle for work purposes, or the perception that there is value in restoring the vehicle to roadworthiness. Our analysis demonstrates that there is no value in restoring salvage title vehicles and the perception of “getting a deal” is nothing more than illusion! Our perspective is from that of the buyer needing to appraise a salvage title vehicle. There is no guidebook that accounts for the type of stigma associated with such vehicles. 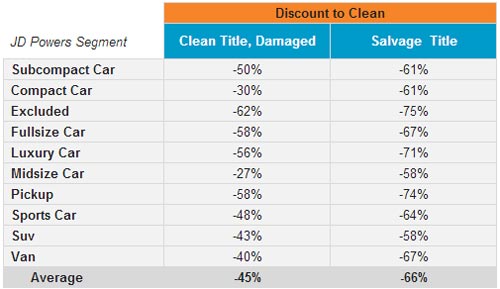 The Salvage Title Factory
Auto Insurers are responsible for the majority of the salvage titles appearing on the road today. Most top-tier insurance carriers salvage brand 100% of their total losses, regardless of the threshold in the state where the vehicle is resold. This is mostly for the purpose of risk mitigation, for required total loss reporting to regulators and industry anti-fraud organizations (NICB) and to avoid potential lawsuits by subsequent buyers. While the lowest published total loss threshold is 60% of ACV, most carriers will “total” a vehicle if repair costs approach 50‒55%. As a result, in states with total loss thresholds on the higher end, many vehicles are totaled for financial rather than legal purposes and are unnecessarily branded salvage.