No Hassles! We Come To You.
Will Tatiana Calderón Will Be the First Woman to Sit In a Formula 2 Seat – What’s All the Fuss?

Will Tatiana Calderón Will Be the First Woman to Sit In a Formula 2 Seat – What’s All the Fuss? 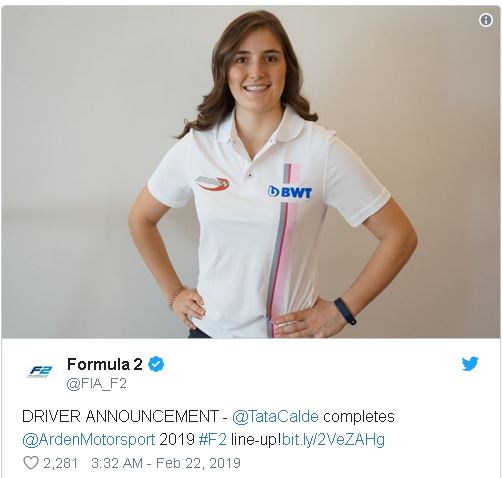 The Arden Team says, yes! News broke on February 22, 2019, that Tatiana Calderón would be joining their Formula 2 team for the 2019 season. This will make Tatiana the first woman driver since the GP2/F2’s inception – 2005 – of modern running. However, will she actually sit in a seat? Race fans took to social media in an outrage claiming her race results history prove she is not a good fit for the series. By the way, before we get into this more, we pay cash for cars, trucks and suvs and you can sell your car quick to us. Fast, safe, and easy really is the best way to sell a car. Get an instant cash offer now and stop worrying “how to sell my car quick!”

Speaking of history, it has been proven time and time again that women really shouldn’t be doing anything that’s a “man’s thing”. Take voting, welding, serving in the armed forces, flying a plane, or running a corporation for instance; why would motorsports be any different? Shutter the thought that Susie Wolff received an MBE, Danica Patrick for racing in NASCAR, Simona de Silvestro in IndyCar, Natalie Decker in NASCAR Truck Series, and so on and so on. You get the point.

Sure, Calderón has many “nevers” under her helmet and the critics are all over it; but what do the critics say of Sean Gelael’s four years in GP2/F2 with not a single win? Or, his record of never finishing better than a massive spot called 15th place? Then there is Roberto Merhi; what do they say about his demotion from F2 to F1 and still not scoring a top 10 spot? The list can go on and on here too.

What are some of Calderón’s accomplishments? She was the first female karting driver to win a national championship in Columbia. In the 2001 Pro Mazda Championship, she finished 6th overall. She was the first woman in the British F3 series to secure a podium and the first to lead a European F3 race. Not to mention she has served as a Sauber – Alfa Romeo racing – development driver with more than a few impressive results testing on the track.

Given the right situation, Tatiana Calderón has proven she is a competitive driver and has earned the right and is coming into her own; and she has the qualifications to be the first woman to sit in a Formula 2 seat. Seriously, what’s all the fuss about? We pay cash for cars from women every day and we have a message for Tatiana. Sell your car quick to Car Buyer USA and we will put cash in your bank FASTer than F2’s lap, so SAFE there will be no crashing into a wall, and as EASY as crossing the finish line; and show ‘em what you are made of on your first run! Get an instant cash offer now, Tatiana Calderón and we will treat you like the winner you are. (Full disclosure: anyone thinking “sell my car quick” and looking for the best way to sell a car, it is here. Really.)