No Hassles! We Come To You.
Part One: Left Lane Slow Poke Hogs Are Breaking the Law

Do you know all U.S. states have a law restricting left lane slow poke hogs from hogging the road? Well they do. Drivers in every state cruising along in the left fast/passing lane are breaking the law if they’re taking their sweet time. There are statistics that show slower drivers who stay in the right lane on interstates allowing those driving faster to keep on truckin’ along, keep the accident rate down and the roads safer. For those of you who feel like you own that left lane because, after all, you’re doing the speed limit, think again. You’re causing a problem and could be heading toward a future crash. While Car Buyer USA definitely wants you to stay safe on the open road, we want you to know if you have a mishap or an accident more serious than a fender bender, you can still sell your car to us. We buy cars in any condition including the not so perfect ones. 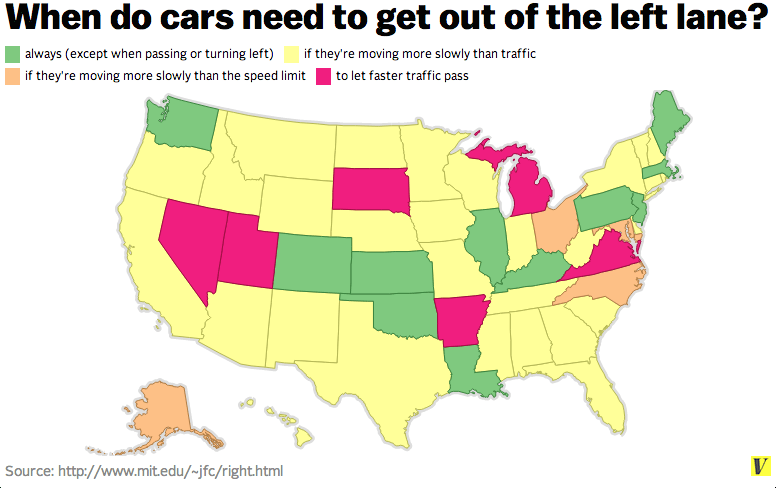 Yes, we know how bad it sounds to say, “Don’t worry if you wreck your car; we’ll buy it anyway, so no worries. You can sell your car.” But what’s worse, is the six o’clock news of someone driving irresponsibly putting themselves and others at risk. Let’s face it, that’s just dumb. So drop the “whatcha you gonna do about it” attitude and move over!

Here’s a video of why you shouldn’t be a left lane slow poke hog.

I’d just left having with my ex-husband (totally his fault) and was driving up the Northway in upstate NY; minding my own business on the 4 LANE Northway. Yep, I was in the left lane doing the speed limit. (To read the rest of my dumb blonde moment, click on the link below.)

The moral of the story, is don’t be one of those left lane slow poke hogs like I was back in the 90s… ok, still am but that was as of today. If you do then you’re breaking the law. And drive smart, be safe and get where you’re going so everyone else does too. And while you’re at it; if you want to sell your car let us know. We’ll buy it and save you from your left lane hog self! Oh, and put cash in your hands before you know it!

Read Part 2: This Left Lane Hog Was Breaking the Law