As we said in the previous A, B, and C lists, not only do we buy cars, give you a high instant cash offer, make it so you sell your car quick, and get cash in the bank FAST, SAFE, and EASY, we are also your place for information you may not know about. For instance, we are doing a series by alphabet letting you in on the hidden meaning of a carmaker's emblem that people instantly recognize. We want people to know we buy cars that are the everyday family cars, trucks, vans, and SUVs, those with a luxury price tag, and exotic cars that are over the top expensive. Car Buyer USA also has a fleet program where we buy from small businesses and mid-sized fleets. As you can see, we cover a lot of ground in the car buying business, When you are thinking, “sell my car quick (or truck, van, or SUV),” think CarBuyerUSA before you sell your car. We are the best and will not be beat! Now, here are the Fs, H, I, J, and K in our series.

This luxury sports car’s emblem was created based on Modena, Italy’s color, Italy’s flag, the Team Ferrari, and a suggestion of luck. Upon winning the Savio track race in Ravenna on June 17, 1923, founder Enzo Ferrari met Countess Paolina – the mother of Count Francesco Baracca who was a national WWI national hero and an Italian Air Force Ace. She asked Enzo to use her son’s red horse stating it would bring him good luck. It is thought that the Count had taken the horse from a German pilot’s plane he had shot down in WWI. Enzo agreed but used a black horse instead to honor the Count’s death and then used yellow as the background to represent the color of his birthplace, Modena. To represent the Team Ferrari, the initials SF – Scuderia Ferrari – were used.

First used in 1927, the blue oval holds Henry Ford’s signature, the company founder. Since 1909, the signature has remained mostly unchanged.

You may have thought this company, founded by Ju-yung, South Korean entrepreneur businessman, in 1967 emblem is just an italicize Honda emblem, but not so. It is mean to be a stylized trust handshake between two people, representing consumer and company, and the company leaning in.

There are two official interpretations for Infiniti with both involving the upward-facing triangle. The first depicts a highway facing towards the future with the second depicting Mount Fuji, which represents the Japanese nationality and quality at its highest point.

Originally called SS Cars, renamed in 1945, the Jaguar evolved from an old SS model and to illustrate forward and grace in motion, the leaping Jaguar ornament was selected. 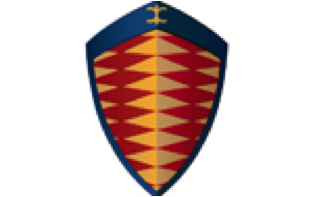 Christian von Koenigsegg, Koenigsegg Founder, comes from German origin. “Von” most often indicates nobility. Koenigsegg ancestry is of German-Romanic Empire Knights of the Middle-Ages. The brand’s badge of red and gold rhombuses is a version of the family’s ancient crest originating from the Swabia region.

So there it is. The “F, H, I, J, and K” list features economy to luxury vehicles, sport, horsepower, and durability with workhorse thrown in for good measure. We buy cars, trucks, vans, and SUVs of all makes and models, including luxury and exotic, and cars and trucks of the everyday blue collar Americans too.

Before you sell your car, truck, van, or SUV, think about us. We are your dedicated used car-buying experts and we buy cars FAST, SAFE, & EASY even if your vehicle has been in an accident and now drives and looks as good as the day you drove it off the lot. We also specialize in vehicles holding liens, those impounded, and many more circumstances. What’s more, we are your total loss thresholds (TLT) experts and we give you the highest instant cash offer for post-accident vehicles in as little as 20-seconds. Once you have your offer, you can sell your car quick (trucks, vans, and SUVs too) for the highest amount you will find. Maybe you do not know what diminished value is and how it connects to TLT; or, maybe you would like to know more. If so, take look here. If you are thinking, “I need to sell my car fast” you can skip right to how it works.